Greg messed up the website. we’ll fix it soon. The coast is beautiful,we have a tailwind,we’re meeting other bikers

Hello everyone – well, it seems that a magical angel named Aaron repaired my recent website blundering – all of the posts have been restored, but unfortunately most of people’s comments have dissapeared like a half-gallon of ice cream placed within our reach.
So, we’re back in not-so-sunny California, making our way along the redwoods coast. The Oregon coast was amazing – there are state parks nearly every 10 miles there, and most of them have special hiker/biker sites for $4 a person, plus you get to meet other crazy cyclists. AND, most Oregon state parks have showers! I’ve taken a shower every day since we hit Astoria – it almost seems like cheating!
The Flat Count has incresed to 10 for Megan and 6 for me – the other day my front tire went flat not 1/2 a mile after I had repaired a rear flat! We’ve been meeting a ton of other tourists, including a couple from the UK who just completed the TransAm route. They tour at least once a year, and they’ve been all over the world – Europe, New Zealand, India, the US. I asked them how many miles they had on their tandem, and the guy said that he’s replaced the computer 3 times, because it stops counting at 100,000 km! Last night, we met a pair of guys who had biked from Michigan. They were hauling a ton of gear, had flat (non-clip-in) pedals, and were planning their routes via a Rand MacNally atlas. One of them said they met a guy in Gillette, WY who suggested they send back anything they weren’t using, and they sent back 40 pounds!
The coast, as you might imagine, has been beautiful – we took an afternoon off to bask on the beach (the ocean water here is about 45 degrees – we got our feet wet, but that’s about it.) The weather has been great, and despite the hilly terrain, we’ve been managing to stay on schedule. We’re hoping to make it back to oakland on the 26th – we’ve got a little less than 400 miles to go!
Unfortunately, sometime in the past day, I’ve managed to lose my cell phone – it could be sitting in a cafe somewhere, it could be in the grass in front of the ‘Welcome to California!’ sign on 101. So it goes….Hopefully someone will find it and leave me a voicemail.
Well, nobody’s stepped up to this computer, so I guess I’ll start giving a more detailed update on the happenings since portland (so long ago!). We trained into Seattle and spent two days hanging out with Jake, Lynn, and Maxwell – Jake proved to be a great tour guide of the city, and we rounded out our stay by seeing a show – Maximo Park – and later, the 4th of July fireworks from Gasworks park (a cool park full of industrial detritus). We left seattle via a nice long bike path, which was a pleasant escape from the traffic. Unfortunately, shortly after leaving the city, it began to rain, and didn’t really stop for a week. That evening, during a downpour, I had my first flat. We were wet and tired enough that we broke down and actually sprung for a hotel in Arlington, WA.
From there, it was we rode north to Lynden – a town that is 50% of dutch descent. We took advantage of this fact by stocking up on hazelnut spread. We had a little trouble crossing the border – we got sent into the immigration station where they asked us a bucnh of questions as they checked our IDs – the immigration officer did a pretty good one-woman ‘good cop/bad cop’ routine.
ok – computer time is up! we’ll continue this adventure at another library! maybe you’ll get some photos if you’re lucky!

Howdy,
We made it into Canada with little more than some extra questioning. That day we rode into Vancouver, which is quite an amazing city. We rode in on the Cambie Street bridge, which offered a view of lots of high rises, all lined up. The city looked very new. We stayed in a hostel while we were there, the first one I’ve ever stayed in, and it seemed very nice. We were able to get a private room for not much more money than the dormitory-style rooms. We took a tour of the city and surrounding area that was led by a former city bus driver. The group walked through the Capilano Rain Forest and over a wooden suspension bridge. It was a rainy, but good day. We left the tour early to try to make it to a ferry across to Vancouver Island. We misjudged the distance and hills and didn’t make it to the ferry we wanted. We bounced on the waves over to Nanaimo, BC later that evening and found a campground that had stayed open very late for us. The next day we attempted to ride to the next ferry, but that was the day that a small needle in my tire tried to destroy my bike. It took five flats to find the little piece of debris that was poking holes in my tubes. On our way, we met two Quebecquois who were also touring the island. We got up the next morning and took another ferry, then rode into Victora. We spent a very short time there (wish it could have been more) then hopped on the next boat to get back to the states.
Alright, we must get going, as we spent the morning watching a dog show at the local fairgrounds. We thought it would be four days until we got home, but it looks like it might be five. We’ll see.
xoxo,
m

At the sf ferry terminal! We’ll be at Jack London Square at 6

Okay, everybody – we made it! We’re safe and sound back in sunny Oakland, gradually relearning how to use stairs and utensils. We’ll post a detailed update soon (once we get our lives in order), but the good news is that we just finished uploading all of our photos. So gaze away at the wonders that have beheld the bikebums, and stay tuned for more stories! 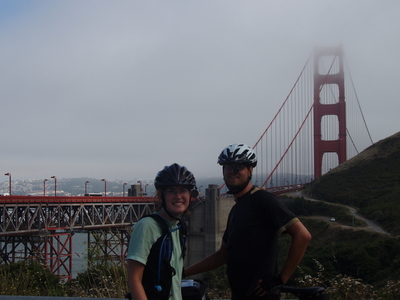 About to cross the Golden Gate! 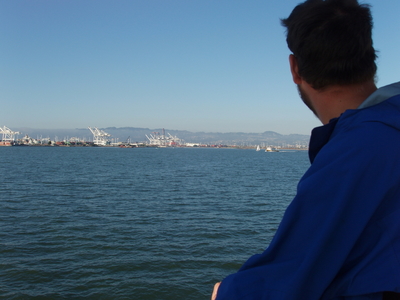