Whoops – long time no post. The quick news is that I’ve met up with Sarah and Megan here in Burlington, and we’re about to go pick up Megan’s bike and head north to Canada.

Let’s see…since the last post, I ran into another couple of tourists riding the entire Northern Tier route (Seattle to Bar Harbor) on a tandem bike. (You can see April and Andy’s blog at http://aprilandhoneychild.blogspot.com) I shared a site with them in Old Forge, NY, which is a crazy tourist town complete with amusement park. The town was kind of a surprise after riding through some really remote roads in the Adirondacks – the kind of place where it seems you could actually pull off something like in The Village. Anyway, while we were doing laundry, April was waiting for Andy to come back with quarters – I joked he was fighting off a bear. Turns out, it wasn’t a joke. When he went back to our campsite, there was a bear eating all our food. Usually I’m pretty careful about that sort of thing, but for some reason I figured the campsites proximity to water slides and arcades would somehow ward the bears away. So, the bear ripped a giant hole in my pannier and ate pasta sauce, bread, and tapioca pudding for dessert. I realized I never thanked Andy for chasing the bear off and cleaning up the pasta sauce mess….so, thanks Andy!

After that, it was pretty much just riding through the beautiful Adirondacks in awesome weather. I did a lot of free camping off in the woods (taking extra care to hang my food). Took a great ferry ride across Lake Champlain into Burlington.

Unfortunately, Megan’s bike was delayed shipping a day, so we had to spend an extra day in Burlington waiting for it. Luckily, my band mate Wendy has a sister in Burlington, and we were able to stay with her. Karen and Grayson were awesome hosts, really everything a bike tourist could want: Soft bed, warm shower, clean laundry, live right off the bike path, and gave awesome tips on where to get tasty food! They really went all-out for us at the last minute. Thanks so much you guys – it was great!

Okay, so we’re about to head off to the bike shop to get Megan’s bike and enjoy our last morning in Burlington (a pretty sweet town if you ever come though). Then, back on the road for us. I’m glad the solo portion of the trip is over – it’s really just not as much fun by yourself. I’ll try to update the blog more often, and will definitely post if either Sarah or Megan meet some awful fate.

We made it across the border fine. Heard lots of hooting owls and eating lots of poutine. Megan saved her wheel from falling apart with help from the queer/trans bike shop in Montreal. Stayed with Jess from CIE who treated us to beautiful beer and delicious accordian. Le Route Verte is awesome so far…so much bike path!

Well, here weare in Quebec City, so far so good. The Route Verte from Montreal has been really nice – almost entirely bike path, extremely well marked, and mostly flat. Most of our camping has been the free by-the-side-of-the-path type. It got a bit hot the last few days, but other than that, we`ve been lucky with the weather. But what you really want to hear about is the food. Oh, the food! Sarah is hooked on cheese curd, and I`m planning on opening a chain of poutine franchises across the US. Chocolate croissants, assorted muffins, May West snack cakes, mozzarella cubes spread on bread, sweet potato beignets, fresh fruits from roadside stands, peanut butter-jelly-craisin-muesli sandwiches, oh and the list goes on! I can`t say that I`m doing Mrs. Wilkinson very proud with my attempts at French, but luckily Megan studied harder than I did. We sailed upon Quebec City at dawn, muskets firing as we stormed the ramparts. We met the enemy on the Plains of Abraham, but the locals showed us that eating croissants with brie and raspberries was better than making war, so a peace was reached. My first encounter with warm showers has turned out great. Our hosts, Krystine and Pierre-Luc, have been really cool, opening up their beautiful apartment up to three random americans. Tomorrow, we take the ferry back across the Fleuve Saint-Laurent and continue our eastward journey towards Gaspésie. Oh, one more belated thank you – I mentioned my pannier was mauled by a bear. Turns out that Grayson (of Karen and Grayson of burlington, vt) is a master at repairing outdoor equipment, and sewed up the tears good as new. Thanks again, Grayson! Okay, definitely bedtime for bonzo over here. Bon Soir! 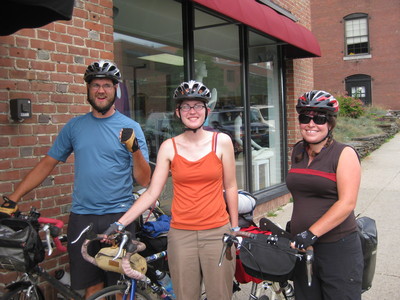 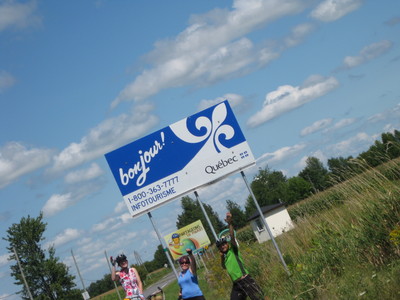 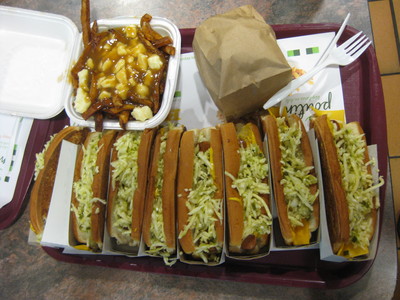 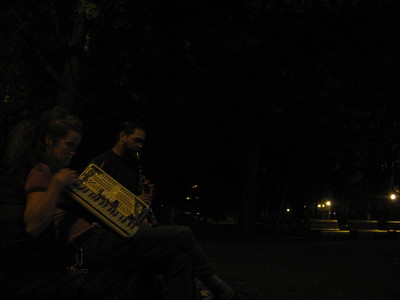 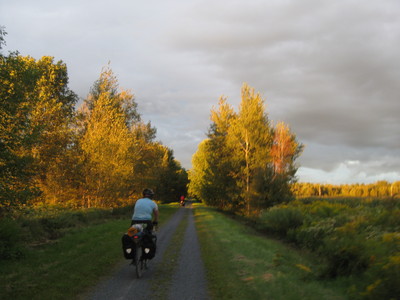 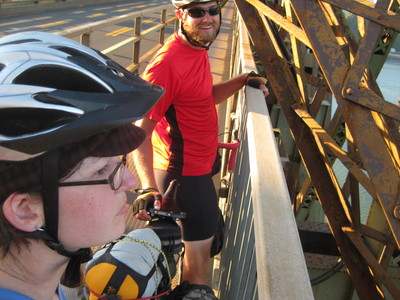 Crossing the bridge into Quebec City

Took the ferry out of quebec city (after cleaning out the local patisserie). Despite our late start, we managed 60 miles anyway due to an awesome tailwind. Staying in a town park near a rock that has some legend about a woman selling her soul that we can’t fully translater.

We miss Sarah already. She got her bike boxed and shipped, and we left her to wait for the train with a belly full of crepes. It definitely seems like the transition from st. Laurence river to ocean has begun…the coastline is very rocky and briney and covered in fried seafood stands. Somehow we’ve gone from the temperature being in the 90s to the 50s. 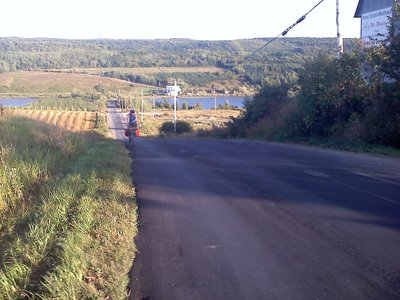 After we said our goodbyes to sarah, we rode straight into a headwind. That plus the cold and rain drove us to shiver in the shelter of the first tim hortons we could find. I,ve never been happier to see a chain food restaurant. As we ate donuts and attempted to translate the newspapers we plotted our evening and decided to find a motel. We spent the night at the le beach watching bad crime drama tv and trying to dry out our socks. We quickly went from mouillex to sec. The weather improved the next day except when greg broke a spoke as it began to pour. We hunkered down under one of canada’s many lovely covered picnics tables to install the kevlar spoke that has saved us so many times. We camped at la martre that night where we saw the first of many phare. The next day started off with an awesome tailwind and lots of flat riding next to the picturesque seaside. The second half of the day included some of the steepest hills i’ve ever ridden my bike up. The grades ranged from 8 to 15 percent. all the people who told us that gaspe is ‘illy were not kidding. After the second day of short but gnarly hills we decided to rest our muscles at the gite blanchette. This mignon b and b had knit cozies for everything: our feet, the kleenix, the extra tp. After yummy whole wheat pancakes and way too much coffee we rode into gaspe so greg could get his wheel fixed. We put in a few miles for a short day until we again got caught in cold cold rain. We are now holed up in the dinner hall of an rv park, surrounded by other people,s pictures of xmas in august. When we said we,d pitch the tent wherever the drunk proprieter told us, you sleep inside, no problem. He then lit the wood stove and wandered out into the night. One last note before i go to bed: don’t buy cheese on special at the marche, even if it’s greatly reduced. That’s probably becuase it tastes like socks.

the rumors are true. Greg had an epic bike failure. His dellaireur est completement casse. Totally detruit. We are not really sure what happened, but think it has to do with not tying off that kevlar thread properly. He had broken a second spoke but had fixed it with the thread and was riding into a thirty mile crosswind. Something didn’t feel right and he realized that the difficulty was not from le vente. It was because his derailleur was in his spokes. It was unfixable. Both the cage and hanger were bent like pretzels. We walked the seven miles to barachois where we were lucky that there was a train station. We rode the rails to the next town with a bike shop. The train ride was gorgeous. The tracks run super close to the water and the large waves seem as if they’ll overtake the train in places. We stayed at the new richmond hotel where the curtains are brocaded and the are old typewriters and phonographs for decor along with calendars of scantily clad women. The only mechanic in town fixed greg’s bike by welding metal to his frame then re tapping the hanger. Awesome. So, we are back on the road and just made dinner in the mess hall of the swankiest provincial park in new brunswick.