In the sparsely populated hills east of carmel valley, a random cyclist tells us of a special gourmet dinner, only on mondays, at “the last real roadhouse” where “farmworkers rub elbows with billionaires.” not quite, but surreal for sure. Great food, in any case. I had “Rabbit 5 Ways”. We camped in their parking lot, too tired to climb the 5-mile hill that dropped us off there. 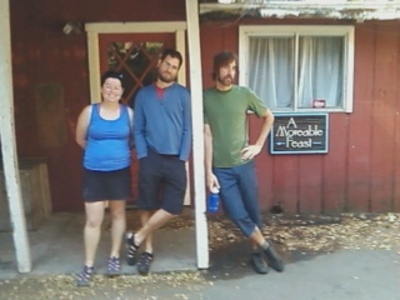 I just realized I took this but never posted it.

Hiya, folks. Yr friendly neighborhood bums have hit a bump in the road, and their proud steeds remain in pasture, sequestered in El Pueblo de Nuestra Senora la Reina de Los Angeles del Rio de Porciuncula for a few days more. Not to worry: the fabled City of Angels turns out to be far more bicycle-friendly than rumour would have it. And indeed, the mad fooding continues unabated, enhanced by such urban amenities as the gourmet hamburger, fresh ahi tuna, beef and pickle tacos, and top shelf tequila. This bum, for one, has never had it so posh.

To update a few thingies left untold by El Jefe: After feasting our faces off in Peterson’s fabled “Last True Roadhouse,” whose owner’s preference for anonymity we shall respect, we were able to wind through the beautiful upper Carmel Valley and down into Arroyo Seco without worry. Unbeknownst to us, we passed by the very spot Richard Farina was killed so many years back. Thankfully our bikes aren’t equipped to drive 90 mph; the salacious curves of that road make for a tempting dance with Lady Fate.

Arroyo Seco was muy, muy seco. Tambien caliente! A lazy, drugged-out snake made a very poor attempt at snagging Sir Gregor and El Jefe along a speedy descent into Salinas Valley. We made haste to Greenfield, ate all of their tacos, and drank all the water. Aided by fierce tailwinds, we made it to storied King City and sought refuge in the tiniest motel room these bums have besmirched. Huge props to Sarah for tolerating some serious manfilth, and mustering the courage to swim a few microlaps in that godforsaken pool.

The next morning had us overeating diner slop en route to climbing “The Quadbuster” up towards Lake Nacimiento. “To name a thing is to give it power,” quoth Sir Gregor, and indeed we were dealt a painful kick to the quadriceps. But we recovered, as we do, and enjoyed a ride alongside Fort Hunter Liggett, which has to be the most scenic military installation in the lower forty-eight. Looks like our troops are fond of paintball games, weird little rickety crowsnests, and never smiling, ever.

We ripped off a 72-mile day, complete with a second lungbusting climb into the nouveaux-riches wine country outside Paso Robles. Thanks to our unintentionally following the Amgen Tour route on our detour (see: Alder Creek slide), I was able to score a couple of new water bottles amongst the scads of litter those “professionals” left in their wake. Ate some Kozy Shak and Cracker Jack at a remote stripmall straight out of an overzealous SimCity experiment. Reviewed the new Robert K. Tannenbaum novel, “Betrayal,” which El Jefe has probably by now checked out of the library and burned.

Paso Robles had little to offer in the way of margaritas, so we settled for pizza and baseball in an upscale Motel 6 on our last night as a posse. Reds-Phillies went into 19 innings, redefining tedium and lulling us into the deep sleep of a brutal day’s biking. By one the following afternoon, we were in SLO with plenty of time to drop Jeff and Sarah into the loving (ha!) arms of Amtrak, saddening our hearts and halving our numbers.

Gregor and I were able to enjoy the frenzy of a Thursday evening farmer’s market, but declined to stick around to see the juggler mount his 6′ unicycle. Excellent street food had by all.

We camped out at Point Mugu the following night, crossing paths with the illustrious Ed from Denver. He’s on his way back home from Costa Rica (yes, via bicycle), and told us stories of a pistol packin’ 80-year old bike touring mama; the improbable destruction of his spindle; and sundry other tales too lurid or unbelieveable to mention here. His stuffed otter is in fine condition, though.

Okay, that’s all for now. Sorry that I don’t have any sideways pictures to post. We’ll save those for this weekend, when veteran Bike Bum Megan joins the fray here in L.A. Stay tuned, friends!

well, we’re back on the route. We caught a train out of LA last night to San Bernardino just in time to catch a foul pop-up as we rode past the sixty-sixers game. Unfortunately, someone decided to build a wall between san bernardino and big bear, and the elevator up to 6000 feet was busted. That combined with the heat, sun, and a major rookie mistake of not bringing enough H2O put the bums in a bad spot. Luckily, the magical oasis of the Oaks restaurant appeared just before we had to drink beaver pee. if you don’t here from us for a week or so, you can assume it’s because we’ve permanently moved into booth #4.

That brutal orb of death has been trying to thwart us but we’re going to keep climbing hill after hill. We climbed a vertical mile two days ago. 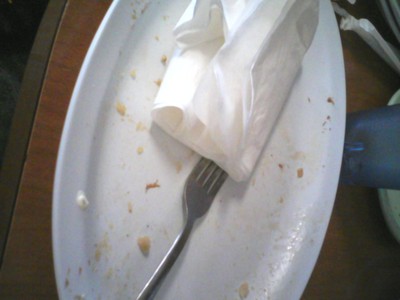 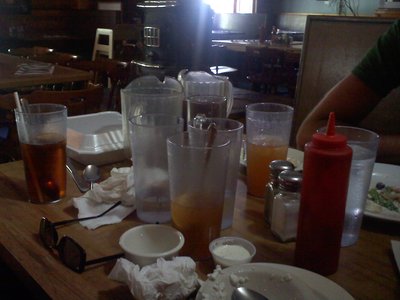 Wow, okay, it’s been a bit. The last week has definitely been the toughest week of bike touring I’ve ever done. We’ve been climbing between 5000 and 6000 feet nearly every day. Add to that the heat and general unfriendliness of SoCal and it makes for rough riding. Despite it all, we our ride through the angeles crest. Rim of the world highway is spectacular, but don’t do it on a weekend. We also survived our jaunt across the mojave desert. However, Nick was enamored by the seedy nightlife of Lancaster and stayed behind to open his own bike saddle accessory emporium, so now it’s just Megan and I. It’s too bad nick took off, because after we crossed the tehachapi range, everything changed. The joshua trees were replaced by wild oak, and the scorching desert flatlands gave way to the golden foothills of the sierras. Additionally, it seemed that folks got friendlier as soon as we left LA county. I just finished a refreshing, much-needed swim in Lake Isabella, and tomorrow we ride up the Kern river canyon. There’s so much more to tell, but I must go to sleep…g’night everyone! 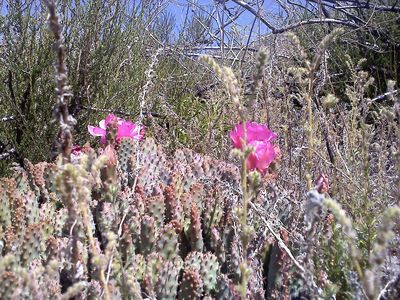 we woke up this morning in 50 degree weather with patches of snow ’round our tent and ended our ride in the foothills where it is 104 degrees. Luckily, while we were re-upping our gatorade fix in a gas station, we were invited to stay in someone’s 5th wheel behind their house. So here we are in Mitch and Debbie’s RV trailer complete with A/C, queen bed and a living room bigger than Megan’s old NYC apartment. We were really lucky to run into them – they’ve been awesome hosts. Other highlights since our last post include